At Cities of Tomorrow #8 the focus lies on how migration influences the urban, economic and social landscape of cities and regions. The main panel will be a dialogue between magnet and shrinking cities.

Ilinca Păun Constantinescu earned her PhD degree in architecture in 2013. She currently practices architecture at Ideogram Studio, teaches theory of architecture at “Ion Mincu” University of Architecture and Urbanism Bucharest, and leads cultural projects within the IDEILAGRAM Association. Together with her team from IDEILAGRAM, she edited Shrinking Cities in Romania. Orașe românești în declin (DOM publishers&MNAC Press 2019) and realized researches and exhibitions such as: Shrinking Cities in Romania (MNAC Bucharest, 2016), On Housing (Timco Halls Timișoara, 2018), Uranus Now (MNAC, 2019, initiated by Zeppelin). She is part of the team that will represent Romania at the Venice Architecture Biennale in 2020, with the project Fading Borders.

Marcel Ionescu-Heroiu works as Senior Urban Development Specialist in the World Bank office in Prague, Czech Republic. Some of the key areas Marcel has worked on include: urban and regional development policy and competitiveness; the management of EU Operational Programmes; project prioritization; local and regional governance; sustainable development and climate change; and brownfields redevelopment. Marcel has led or contributed to projects in: Romania, Poland, Turkey, the US, Serbia, Macedonia, Bosnia and Herzegovina, India, Georgia, Azerbaijan, and Croatia. Marcel received his undergraduate degree in Economics from Babes-Bolyai University in Cluj-Napoca, Romania, and holds a Ph.D. in Regional Development from Cornell University, Ithaca, New York, USA.

Ullrich Sierau is the Mayor of the City of Dortmund. After completing his degree in spatial planning at Dortmund and Oxford, he worked in the Ministry of Urban Development, Housing and Transportation of the Federal State of North Rhine-Westphalia. In 1994 he became the director of the Dortmund-based Institute for Urban and Regional Development Research of North Rhine-Westphalia (ILS). From 1999–2007 he served as councilor and head of Dortmund’s Department for City Planning before being appointed planning officer for Urban Planning and Infrastructure in 2007. In 2009 Ullrich Sierau was elected as Lord Mayor of the City of Dortmund and was re-elected in 2014. Since his election, Mayor Sierau has put major emphasis on implementing sustainable urban development projects. As a result, Dortmund was awarded the title of Germany’s Most Sustainable City in 2014.

Șerban Țigănaș lives in Cluj-Napoca, Transylvania, Romania. Following his architectural studies in Bucharest he kick-started his career by winning several competitions and working in different cities and teams. In 1997 he founded Dico and Tiganas, architecture and engineering, an interdisciplinary internationally awarded firm. Since 2001 he became an activist for the profession in OAR, the Order of Architects, including two mandates as president, 2010 – 2018. He contributed internationally in ACE as board member and in UIA as council member. He is an associate professor at the Technical University of Cluj – Napoca and holds a PhD in architecture.

Dr. Emil Boc is the Mayor of Cluj-Napoca, the biggest city in Transylvania. After completing his Law, History and Philosohpy studies and his PhD in Political sciences and political philosophy at the ”Babeș-Bolyai” University in Cluj-Napoca, Mr. Boc began his professional life as a lawyer at Cluj County Bar Association and later as a lecturer at the Faculty of Political, Administration and Communicatio Sciences and at the Faculty of Law, ”Babeș-Bolyai” University. After entering politics, he held various offices before holding the office of Prime Ministr of the Government of Romania between 2008-2012. He was first elected Mayor of Cluj-Napoca in 2004 and reelected in 2012. Mr. Boc is a Member of the European Commission of the Regions since April 2017 and Rapporteur on Brain Drain in the EU in the SEDEC Commission of the European Committee of the Regions since July 2019. 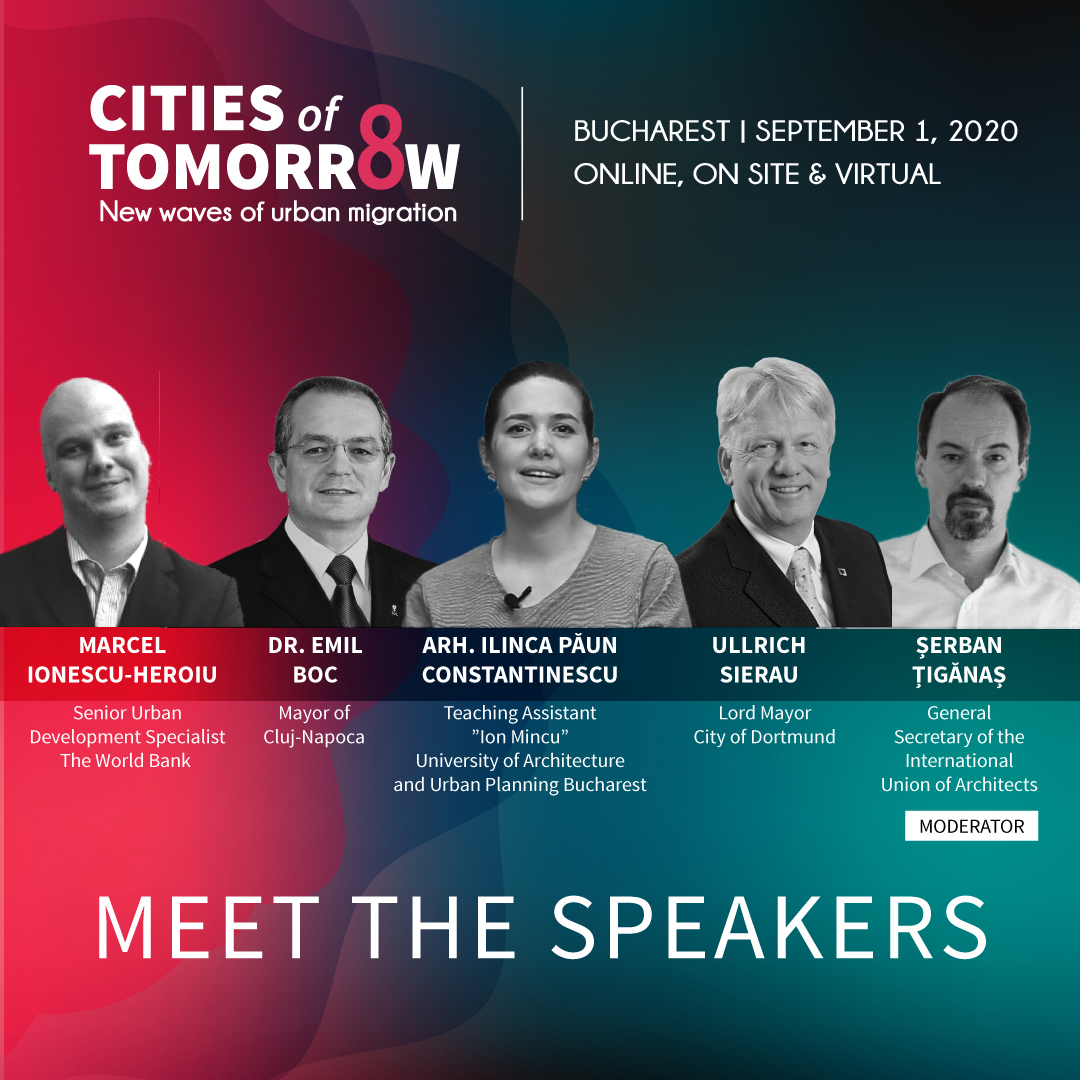 This year, at Cities of Tomorrow #8 we bring forward the topic of migration and how the movement of people shapes the urban landscape.

Guest of honor of this edition and keynote speaker is Mr. Ullrich Sierau, Lord Mayor of Dortmund. After his election in 2009, mayor Sierau emphasized the implementation of sustainable urban development projects, with Dortmund receiving several awards for sustainability.

From a city formerly known as the engine of Germany’s industrial revolution, Dortmund went through a process of structural changes after the 1975 steel crisis left the city without 90,000 jobs and dealing with significant environmental damage.

Within less than two decades, the city’s urban landscape was transformed by the implementation of a series of large-scale reconversion projects that led to the reconfiguration of the city and put Dortmund on the list of cities offering a high quality of life to its citizens.

Register now and benefit from the 20% Early Bird discount until February 15, 2020.

Any cookies that may not be particularly necessary for the website to function and is used specifically to collect user personal data via analytics, ads, other embedded contents are termed as non-necessary cookies. It is mandatory to procure user consent prior to running these cookies on your website.